Knowing many dance steps and figures is fun, but the true art of social dancing, and its greatest pleasures, lie in great partnering. As the swing tune goes, "It ain't what you do, it's the way that you do it." The nonverbal lead-follow connection betwe 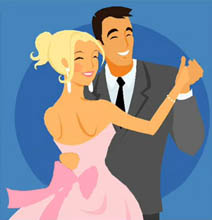 Fall in love again. Rekindle your love through the intimacy of dance. Feel the thrill of rediscovering your feelings in the arms of each other. Mesmerizing, romantic, and exciting - dance is the ultimate aphrodisiac.