Reflections On a Lifetime: Giving Back to the Community Through the Gift of Dance

From her enthusiastic style to her smile and charming wit, Mary knows how to draw in a crowd; and has entertained groups of all ages to the song "Rocky Top," which is an all time clogging favorite. Now batteling Cancer, Mary's still proudly displays in he 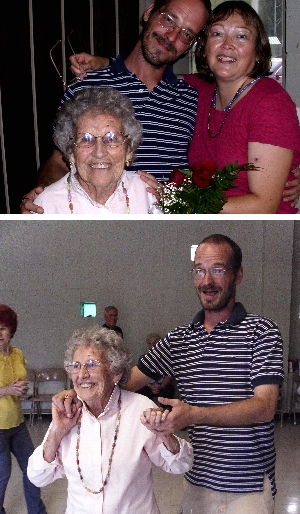 Almost anyone in Louisville, KY can tell you that the city is rich with theater arts, and dancing. But ask them what the offical dance of Kentucky is, and you may receive some blank stares. It may come as a suprise to some, but Clogging is the official State dance of KY. Originating in the Appalachian Mountains during the mid 1700's, clogging is a form of social dance that is a combination of Irish, Scottish, English, and German folk dance. As a form of entertainment, settlers would gather in the evening and share folk songs and steps that were native to their country. It was from these early beginnings that Clogging emerged.

During the 1920's two nail taps were introduced to the clogging shoes, and are what creates the jingling sound often associated with the dance today. The sound is made by striking the heal or toe against the floor or each other to create the percussive rhythms. Although country social dancing has declined in recent years, Clogging has remained a popular form of entertainment at festivals in the Louisville, KY area. A forerunner to tap dancing, clogging requires the dancer to perform with percision and enthusiasm.

Mary Brown, 89; born in Nelson County, KY is one such performer. She remembers the day when Clogging was all the rave. In fact she has Clogged and danced her entire life. From her enthusiastic style to her smile and charming wit, Mary knows how to draw in a crowd; and has entertained groups of all ages to the song "Rocky Top," which is an all time clogging favorite. Now batteling Cancer, Mary's still proudly displays in her home; a lifetime of colorful ribbons and trophies she has received over the years from places like the Ky State Fair, competitions, and various dance groups. Sharing her talents with Special Needs Organizations, she has both inspired and brought joy to many with her gift of dance; and has received speical recognition for those efforts.

Ask anyone who knows Mary and they will likely tell you that her all time favorite dance is the waltz. Those of us who Ballroom Dance know that the Waltz can be danced in many forms including ballroom, linedance and couples dancing. Rita's Waltz, both a linedance and a couples dance; became the dance of choice and was taught in honor of Mary during a special evening where some of Kentucky's finest linedancers gathered at Midlane Presbytarian Chruch (6209 Six Mile Lane) to honor her lifetime of sharing and giving back to the community. Presented with a boquet of Roses, old friends as well as newcomers to dance; learned about the large positive impact we can make when we unselfishly share our skills with others. "We honored Mary and had her speical friend Steve Houpt ( a ballroom dancer ) to come and do Ritas Waltz with her." Said Ed and Doris Peters who instruct the linedance classes there from 6:30pm to 9:00 pm each Tuesday. "Mary had a big smile as she entertained us and her words were "I have died and went to heaven tonight!" "What a special Lady!" They said.

Entertaining anywhere she can, Mary never lets the possibility of making a mistake ruin her evening. In fact, she makes the mistakes part of her routine. Realizing the novice appreciates just being entertained, she has disguised anything from fatigue by incorporating it at the end of a difficult clogging demonstration, to covering up near falls; and she makes the transition so easily. "I went down on my knee, and got up real quick" Mary said as she recalled the dances they use to have at the apt. complex where she now resides. No one knew she had made a mistake, and they applauded her. "They all thought it was part of the dance," she added with a quick smile.

Traditionally danced to bluegrass music, Clogging has taken on many forms including "Street Dancing," During the 1980's "Buck Dancing" emerged as a more complicated style. The National Clogging and Hoedown Council was formed in 1974 and is part of C.L.O.G. National Clogging Association. Like Ballroom Dancing, Cloggers enjoy annual competitions. Each year the sanctioning body hosts the grand championships at the Opryland Hotel in Nashville, Tennessee where some of the best Cloggers gather to demonstrate their unique talents. For more information on these exciting events, or to learn more about Clogging; visit http://www.clog.org.

Melva Gail Smith is a disabled dance enthusiast from Louisville, KY who enjoys promoting the health and social benefits of both dancesport and linedancesport through her writings. Melva has written for USA Dance, as well as various online magazines; and is the inspiration of dance choreographer Ira Weisburd's Breathe Freely Campaign for Multiple Chemical Sensitivity Awareness.